"Do Androids Dream of Electric Sheep?" by Philip K Dick

, and so they will know the basic plot of Philip K. Dick’s novel “Do Androids Dream of Electric Sheep?” Some of the details are glossed over in the movie, but the background is that Earth's ecosystem has collapsed after a militarized dust sweeps over the world, killing most of the animals. Most of the eligible citizens have emigrated to Mars or other planets, leaving behind a sparse population, mostly of marginal people who suffer from brain damage, or other genetic impurities.

Bounty hunter Rick Deckard is tasked with hunting down six Nexus-6 androids who have escaped on Earth. He wants to use the money from the job to replace his artificial sheep with a real animal -- maybe an ostrich or a horse. In this future animals are so scarce that it’s a status symbol to own one, especially a larger animal, and even a small spider is revered. People like Deckard, who have no animal, buy artificial replacements. 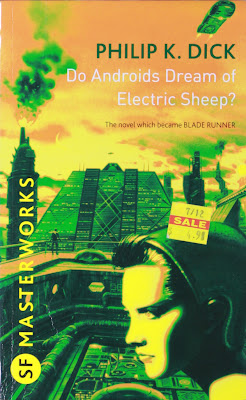 “Do Androids Dream...?” can be read on two levels. The story could be about civil rights, with the androids as second class citizens, sent to slave labor in off world colonies, and hunted down and “retired” when they escape. The simulacra are the black slaves of the future.

Alternately, the story is about seeking empathy across all beings. The androids can't express it, while the fading human population grasps for it. Throughout Dick’s work he often used androids as a way of indicating a schizophrenic break from reality. For example, the scene in “Martian Time-slip” where Jack Bolen visits his son’s school and remembers his own psychotic break where he saw everyone as androids. Maybe this was a metaphor that Dick really liked, and so he stuck with it, or perhaps he had experienced something like this in his own mental illness, and drew his writing from personal experience.

Nowhere in the book does the phrase "Blade Runner" occur, but it's worth comparing the book with the movie. There are many things omitted from “Blade Runner” that are central to the novel. For example, the secular religion of Mercerism based on a shared empathy. In Mercerism, people connect using an Empathy Box to become Wilbur Mercer, a Sisyphean soul who is doomed to climb a hill while being pelted with stones. As people use the box to connect with Mercer, and share the torment with everyone else using their Boxes, they are united in purpose, so that the joy or suffering of one contributes to the joy or suffering of all. One character describes Mercerism: “Wilbur Mercer is always renewed. He's eternal. At the top of the hill he's struck down; he sinks into the tomb world but then he rises inevitably. And us with him. So we're eternal, too."

Opposite to Mercerism is The Buster Friendly Show with its 46 hours of entertainment per day. This government-sponsored talk show on TV and radio is an eerie precursor to the cable TV shows we can see today. Buster keeps up a constant dialog with his regular stable of guests, but also subtly undermines Mercerism. One character thinks that Buster Friendly and Mercer are in a competition for the minds -- the psychic selves -- of humanity. This is the balance between following a higher calling, and focusing on the day-to-day aspects of our lives.

Interestingly, "Do Androids Dream...?" intersects with the world of "We Can Build You," occurring years after the founding of the Rosen company. In “We Can Build You” the Rosen company is making musical organs of some kind, but decides to branch out to make simulacra. Now, in “Do Androids Dream...?” the Rosen Association is the leading producer of androids. Evidently the organs have been spun off into a subsidiary enterprise, since Deckard has a Penfield Mood Organ alarm clock -- a machine that helps him into the correct mood for waking, resting, or fighting with his wife. 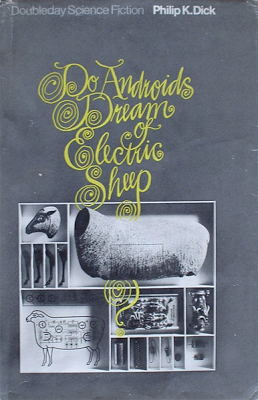 The movie also dropped Iran, Deckard’s wife, with whom he has a rocky relationship. The friction in their lives isn’t made any better by Deckard’s decision to have an affair with Rachael Rosen, who is more evidently an android in the book. Even more complicated, Rachael is the same model as Pris, one of the androids Deckard needs to retire. In a twisted version of the Kill-Marry-Screw game, another bounty hunter gives his advice to Deckard:


“Don’t kill her...and then feel physically attracted. Do it the other way.”
Rick stared at him. “Go to bed with her first--”
“--and then kill her,” Phil Resch said succinctly. His grainy hardened smile remained.


My favorite part of “Do Androids Dream...?” that’s only hinted at in the movie is the kipple.


"Kipple is useless objects, like junk mail or match folders after you use the last match or gum wrappers or yesterday's homeopape. When nobody's around, kipple reproduces itself. For instance, if you go to bed leaving any kipple around your apartment, when you wake up the next morning there's twice as much of it. It always gets more and more.""I see." The girl regarded him uncertainly, not knowing whether to believe him. Not sure if he meant it seriously.
"There's the First Law of Kipple," he said. "'Kipple drives out nonkipple.' Like Gresham's law about bad money. And in these apartments there's been nobody there to fight the kipple."
"So it has taken over completely," the girl finished. She nodded. "Now I understand."
"Your place, here," he said, "this apartment you've picked -- it's too kipple-ized to live in. We can roll the kipple-factor back; we can do like I said, raid the other apts. But --" He broke off.
"But what?"
Isidore said, "We can't win."
"Why not?" The girl stepped into the hall, closing the door behind her; arms folded self-consciously before her small high breasts she faced him, eager to understand. Or so it appeared to him, anyhow. She was at least listening.
"No one can win against kipple," he said, "except temporarily and maybe in one spot, like in my apartment I've sort of created a stasis between the pressure of kipple and nonkipple, for the time being. But eventually I'll die or go away, and then the kipple will again take over. It's a universal principle operating throughout the universe; the entire universe is moving toward a final state of total, absolute kippleization." He added. "Except of course for the upward climb of Wilbur Mercer."


For all these things left out of “Blade Runner,” it’s still a great movie, and a great adaptation. Rutger Hauer fits Roy Batty to a T, as does Harrison Ford as Deckard, a lumpy, aging agent who’s pretty good at his job, but not the best. Although many other films have been based on PKD’s stories, “Blade Runner” was the only one filmed when he was still alive, so it’s the only one where we have his own opinion. In an interview in Starlog #55 in February 1982 Dick was enthusiastic of  this reworking of his material.

“I don’t want to say that (David Peoples) took a bad book and made a great screenplay; that’s not true either. They also didn’t take a good book and make a bad screenplay. They took a good book and made a good screenplay, and the two reinforce each other. They don’t fight each other now. The impression I got was that the first thing Peoples did was read the book, and then not only did he have the skill and the talent to bring to bear, but he was also conscious of the book. So now the book and the screenplay form two parts of a single whole. Each reinforces the other. If you start out with the book, the screenplay adds material to that, and if you start out with the screenplay, the book adds material to that, so they’re beautifully symmetric. This is a miracle. A real miracle.”


For those who have come to experience PKD through “Blade Runner,” take some time and read the novel “Do Androids Dream of Electric Sheep?” What you will find there isn’t as slick as the movie, and the theme is slightly different, but you will find one of the best examples of Dick’s genius in using science fiction to understand humanity and what it means to be human.

From the 1999 Orion Books edition:


War has left the Earth devastated. Through its ruins, bounty hunter Rick Deckard stalks, in search of the renegade replicants who are his prey. When he isn’t “retiring” them, he dreams of owning the ultimate status symbol -- a live animal. Then Rick gets a big assignment: to kill six Nexus-6 targets, for a huge reward. But things are never that simple, and Rick’s life quickly turns into a nightmare kaleidoscope of subterfuge and deceit.