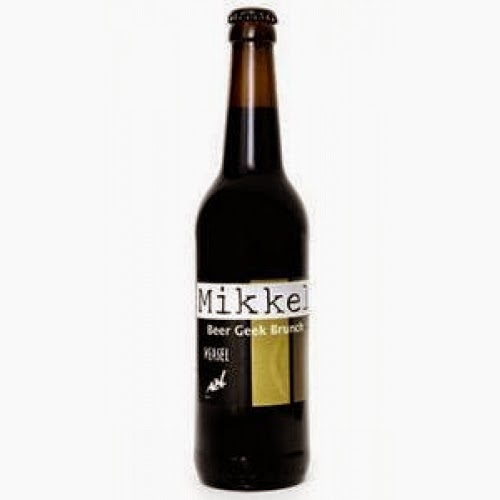 Some beer might taste like piss, but connoisseurs have flocked to try a beer that is literally made with excrement.

Beer Geek Brunch Weasel, from the Danish brewery Mikkeller, is described as an Imperial oatmeal stout brewed with Vietnamese ca phe chon coffee, which translates as "weasel coffee."   The coffee is collected from the poop of Asian palm civets, a weasel-like animal that lives in the forests near the coffee plantations. The civets eat the coffee fruit, but can't digest the hard beans.

Mikkeller took the process one step further, and used this crap coffee to make a world-famous stout. Reportedly, the entrepreneur who popularized this coffee is now against it, for surprising reasons. Mikkeller points out that their supplier for ca phe chon treats the civet cats with care and respect.

Not to be outdone by the Danish, a Japanese brewery has taken the civet cat poo beer to the next level.  The Sankt Gallen Brewery created a beer called Un, Kono Kuro, which uses elephant dung from Thailand to provide a rich chocolate flavor.

Similar to the civet cats, the elephants provide an integral step to the coffee used in the beer:


"In the lush hills of northern Thailand, a herd of 20 elephants is excreting some of the world’s most expensive coffee....The coffee beans used in the beer come from elephants at Thailand’s Golden Triangle Elephant Foundation, which cost over US$100 per 35 grams. The beans are so expensive as 33kgs of beans in the mouth yields 1kg of useable coffee beans." (USA Today)

This beer was released on April 1st.  While the tongue-in-cheek name (Un, Kono Kuro is a pun on the Japanese word for crap "unko") belies the humor behind the brew, it was actually made and ended up selling out within a day.  The brewery makes other idiosyncratic concoctions, such as a beer based on a manga and a "bean paste rice cake wrapped in a cherry leaf flavor beer" for the sakura (cherry) festival.

Here is a taste-test of the elephant crap beer.

Beer has four basic ingredients: water, grain, hops and yeast.  Yeast is perhaps the most magical. Monks in Europe have brewed ale for centuries using wild yeasts growing in their abbeys. The microscopic fungi live all around us, but they have the ability to convert the sugar in the grains into alcohol.

Rogue Brewery in Oregon has taken this abundance of wild yeast to the obvious conclusion, and created a brew based on the wild yeast found in one brewer's beard.


"Beard Beer is brewed with a yeast created from Brewmaster John Maier's Beard. No Need to freak out, Brewers have used wild yeasts in beer making for centuries. John has had the same Old Growth Beard since 1983 and for over 15,000 brews, so it is no great suprise that a natural yeast ideal for brewing was discovered in his beard."

Normally beer aficionados prefer fresh beer, especially when seeking out the more hoppy esters, and they leave the aging to wine, whiskey and people.  High alcohol beers, however, often get more interesting with age. As the beer sits in the bottle, slow oxidation will mellow the hops and enhance malty flavors adding complexity to the brew. Storing the bottles correctly makes a world of difference, since light and heat will decompose the chemical compounds that make beer interesting.

Usually a large barleywine is enhanced after a year or two mellowing in the bottle.  But, to paraphrase Stan Lee, with great aging comes great cost.

Recently the Hair of the Dog brewery sold twelve bottles of a special reserve ale called Dave that has been aging in the bottle since 1999.   The auction netted $2,000 per bottle, making it the world's most expensive beer. According to the brewer Alan Sprints the beer has aged well.

Don't have $12,000 for a six pack? You're in luck! The closely related beer Adam is a lot more affordable.

Can you imagine a beer so distinct, so indicative of your identity that you would prefer genocide to surrendering the recipe to the invaders?

The Robert Louis Stevenson poem "Heather Ale" is based on an old Scottish legend.  The story goes that around 843 AD the Scottish king Kenneth mac Alpin decided to wipe out the smaller people known as the Picts. In the poem, his men hunted every man, woman, and child until they were gone.


There rose a king in Scotland,  A fell man to his foes,He smote the Picts in battle,  He hunted them like roes.Over miles of the red mountain  He hunted as they fled,And strewed the dwarfish bodies  Of the dying and the dead.

Finally, there were only two of the small people left, a brewer and his son.  The King said he would grant one of them his life if he would give up the secret to Heather Ale, the mystical brew of the Picts.  Rather than lose the honor of his people, the brewer drowned his son and killed himself to keep the secret.

Since 1988 the Williams Brothers near Glasgow have been brewing leann fraoich, Gaelic for "heather ale."
It is described as "a light amber ale with floral peaty aroma, full malt character, and a spicy herbal finish - This beer allows you to literally pour 4000 years of Scottish history into a glass."

Other tasters have described it this way: "Somehow the sweet gale and heather used to spice the beer balances the malt. It's ... herbal."