Learning from the Humbug


When I was a kid one of my favorite books was "The Phantom Tollbooth," by Jules Feiffer. I loved this book about a kid called Milo who explores a strange land called the Kingdom Of Wisdom. He gets there by driving an electric toy car through the titular tollbooth, and ends up on a quest to save the Princesses of Rhyme and Reason from the castle in the air. Both the book and many of the characters in it promote education as a virtue, which was a theme that rang a bell for me.

There was one character, however, the Humbug, who was a downright uneducated character.  As the Spelling Bee declaims:


"This...is the Humbug. A very dislikable fellow."
"NONSENSE! Everyone loves a Humbug," shouted the Humbug.

Feiffer clearly made the Humbug one of Milo's companions as a foil to his journey through Wisdom. Whenever the Humbug fails to learn something, Milo benefits by learning from it. For example, in one passage, the Mathemagician poses a problem: 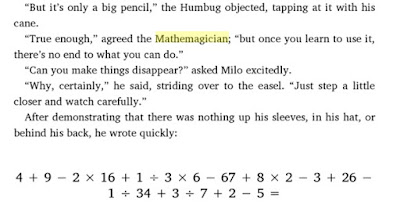 Then he looked up expectantly.
"Seventeen!" shouted the bug, who always managed to be first with the wrong answer.
"It all comes to zero," corrected Milo.

I have often thought about the poor Humbug, who was always first with the wrong answer.  It seems to be both a curse, and a failure of personality. Feiffer obviously thinks that the Humbug cannot learn from his mistakes.

And then I had a revelation. It came to me while reading a quote attributed to one of the signers of the Agile Manifesto. The revelation is this: The Humbug provides value to Milo by setting an anchor for the right answer.

How many times have you had to make a decision, but resorted to procrastination?  You gather and process all the information, yet end up with analysis paralysis. This is analysis over action and it's an agile anti-pattern that should be avoided. It's better to make the decision, test it, and learn how to adjust based on the results of the action. Of course, keeping the action small and measurable is a key tenet of agile.  For example, a heart surgeon doesn't jump directly to making the first incision, but instead advises the patient on the risks and benefits of multiple procedures and works from that to provide the best outcome for that patient.

But even small decisions have anchors. As Daniel Kahneman writes in "Thinking Fast and Slow," the anchoring effect can skew subsequent judgment.


"Estimates stay close to the number that people considered—hence the image of an anchor. If you are asked whether Gandhi was more than 114 years old when he died you will end up with a much higher estimate of his age at death than you would if the anchoring question referred to death at 35. If you consider how much you should pay for a house, you will be influenced by the asking price. The same house will appear more valuable if its listing price is high than if it is low, even if you are determined to resist the influence of this number; and so on—the list of anchoring effects is endless. Any number that you are asked to consider as a possible solution to an estimation problem will induce an anchoring effect."

The value of the Humbug, however, is that you know his answer is always wrong. This is an easy way to get free from the anchoring effect.

Even Stan Lee, known as a co-creator of Spider-Man and The Fantastic Four, claimed to be a Humbug once in a while. In one interview he told how he worked with a comic book artist who had a fear of the blank page. The artist would sit for hours at the page, poised to draw, unable to bring the pencil to the paper. Lee saw that the only way to overcome it was to scribble on the page, so he did. After that, the artist could begin drawing.

Who was Agile Manifesto signer who spurred my thoughts? Ward Cunningham, inventor of the Wiki.

According to Steven McGeady, Cunningham advised him in the early 1980s, "The best way to get the right answer on the Internet is not to ask a question, it's to post the wrong answer." McGeady dubbed this Cunningham's law.  Interestingly enough, Wikipedia points out: "Although Cunningham was referring to interactions on Usenet, the law has been used to describe how Wikipedia works."

So, the Humbug has his value: to be first with the wrong answer. Being wrong makes it easier to fail early and fail fast.  A known bad starting point helps formulate the right direction.  Use what was learned from the wrong answer to head for a better one, and hopefully you will be like Milo and finally find Rhyme and Reason.
No comments:
Email ThisBlogThis!Share to TwitterShare to FacebookShare to Pinterest
Newer Posts Older Posts Home
Subscribe to: Posts (Atom)