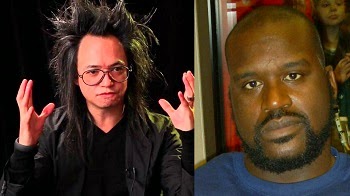 I noticed a bump in web traffic on my blog yesterday. Tracing down into the stats, I found a lot of the traffic was coming from a post on The Verge called "Shaq and Shingy hacked my brain with #brands."

How do I fit in with Shaquille O'Neal, AOL's digital futurist David Shing, aka Shingy, and a conference on brand innovators?  I wondered the same thing.  Then I scanned down the article.

Shingy's favorite quote from Leonardo Da Vinci is "Simplicity is the ultimate sophistication."  That clicked. Several years ago I wrote an essay called "The Trouble With Simplicity..." where I tried to track down, through the Internet and (gasp) printed books, whether Da Vinci actually wrote this quote.

The author of the piece on The Verge links to my piece as a way to say Da Vinci did not write the quote in question.  But that's not exactly my answer, which is less simple. To quote myself:

Regardless, I appreciate the web traffic.  Now, back to work on my #brand :-)
No comments:
Email ThisBlogThis!Share to TwitterShare to FacebookShare to Pinterest

For most people, New Year games are probably football.  In my family, however, for the past couple years we've had the privilege of playing board and card games all day with friends. The family that hosted has an amazing wall of games, and Rael describes himself, among other things, as a "fledgling game designer."

This year's games included some new, some old. The party had a wide age range, from young grade-school kids to aging baby boomers, but almost all the games were appropriate for all ages.

We arrived just in time to participate in a "break the ice" game of Cat and Mouse. This is a party game where everyone gathers in a room, and one person is the cat and another designated as mouse.
People hand off roles by tapping a person next to them. The "cat" chases the "mouse" around the room until it catches it, or time runs out. It's a good large group game.  A more complete description is here.

After that, we settled down to business. Fun business. I managed to play five games, with Small World Underground taking the most time.

Red7 by Asmadi Games is a card game that I'd describe as being the opposite of Uno. Instead of being the first to go out, you want to be the last person playing. Like Uno, the cards have rules associated with the colors. Each time a player puts down a card, it has to be a winning move based on the current rules in play, otherwise they are out. It seems simple at first, but as the play progressed I realized the intricacies of the game.  Quick to learn, but each hand can be as sophisticated as your opponents.

Another card game was Sushi Go! by Gamewright.  Like a sushi conveyor belt, players are dealt a hand of cards and then must choose one while passing the rest of the hand to the next player. The various cards have point values or can modify other cards.  For example, a piece of nigiri is 2 points, or two tempura cards make 3 points. It's a fast game to learn, and the younger kids seemed to have a lot of fun playing it. There's some satisfaction at the end of a round when the cards fall your way, even though your hand is always changing. The illustrations of sushi are fun, as well.

Splendor is described as a board game, but it's actually a card game with playing pieces. The object of the game is to gather enough gem cards to score 15 points. Players gather gems by spending coins, which each player gets a chance to accumulate from a bank. After you get each gem card, those can be added to the coins as collateral for further gems. When I got the hang of it I realized that resource hoarding can be a way to block your opponents from gathering gems. A game goes quickly, and it seems like it would be easy to play several times in a hour. From Asmodee, the company that also made Dixit and 7 Wonders, the art on the cards is interesting, but nothing special. The coins, however, had a nice hefty feel to them and were fun to play with.

The most involved game that I played was Small World Underground from Days of Wonder. Small World is like Risk, except set in a fantasy world and the different factions are different species of elves, mummies, lizard-men and what-have-you. The mechanism for creating and assigning races is interesting. Although there are a fixed set of races, they are paired with special ability cards, which are assigned randomly. Also, the cards are queued up, and it's possible to buy your way out of the first or second pair in the queue. For example, I paid 1 gold piece to skip the Argumentative Dwarves and become instead the Mystic Mummies. Aside from the expansion and invasion gameplay, there are also opportunities to gather magic items which enhance or detract from abilities. While shorter than Risk, the gameplay can take a while, so it may not be as sustainable for younger kids.

We rounded out the evening with Diamonds, by Stronghold Games. It's a card game, similar to Hearts, except instead of points, the goal is to gather little plastic diamonds in your vault. The card suits have special abilities: diamonds allow you to bank a diamond, hearts let you take a diamond, but it's not yours yet, and clubs mean you can steal a diamond from another player. If you've played Hearts or any other trick-taking card game, Diamonds is simple to learn. But the opportunity to steal points from other players makes for an interesting twist on an old game.

In all, we had hours of fun playing these games, and it was an activity that both kids and adults enjoyed.
No comments:
Email ThisBlogThis!Share to TwitterShare to FacebookShare to Pinterest
Newer Posts Older Posts Home
Subscribe to: Posts (Atom)