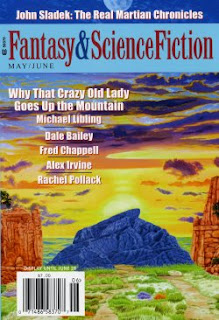 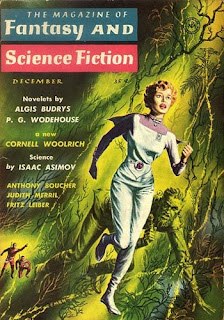 I got an issue of Fantasy and Science Fiction in the mail the other day. In this Internet era it's nice to get something more than junk mail in your home mailbox, especially when it's unexpected. Ok, wasn't entirely unexpected: I asked for a review copy, but I'd forgotten about it. So, like a friend whom you've invited over for dinner, but forgot to write down the date, I was happy but surprised to see the manila envelope waiting for me on the front porch.

The Magazine of Fantasy & Science Fiction and I have a long history. In high school my friend Stuart Pope introduced me to it via Robert Silverberg's "Lord Valentine's Castle," which was being serialized in F&SF before it was released as a book. By my Junior year I'd already read the Lord of the Rings trilogy and also the Lord Foul's Bane trilogy, which was was popular at the time and also ran in the vein of dwarves, elves and rings. But I didn't consider myself a "fantasy" fan, siding more with sci-fi writers like Philip Dick, Arthur Clarke, and John Brunner. Likewise, most of the short stories I'd read came in single-author collections. In F&SF I found a magazine that successfully merged fantasy, horror, and a certain style of science fiction into a single volume. I had to have more.

The same summer I discovered F&SF we spent several weeks at my family's rustic cabin in the woods near Port Orford on the Oregon coast. Since then I've made it a habit of picking up new and old issues of the magazine for reading by the lantern as the night fog rolls in from the beach, or in the mornings as the sun chases away the dew. Periodicals Paradise in NE Portland has a near critical mass of reading material, and so I'm performing a public service buying my back issues there, reducing the chance of a pulp explosion. I get about five issues from various decades. They all have a similar format: two or three novellas or "novelets", four or five short stories, some book reviews, a film review, maybe a serialization of a novel, and a couple cartoons. For years (30 years?) the cartoons were 100% Gahan Wilson, but more recently other contributors have squeezed in. In addition to the stories the magazine also ran the occasional contest organized around sci-fi books. I remember one contest asked people to contribute a book title with one letter added to make it funny. The winning entry was either "The Motel In God's Eye" or "Dog Androids Dream of Electric Sheep." 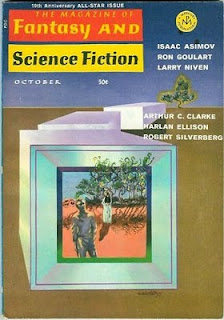 On the masthead it proclaims "61st Year of Publication." In that span of time quite a few writers have had amazing careers grow and flourish. I have an issue from December, 1958 that shows stories by P.G. Wodehouse, Algis Budrys, Isaac Asimov, Fritz Lieber, and Anthony Boucher on the cover. Not until you read the table of contents do you see that Ron Goulart and Walter Tevis are also contributors! By 1968 the "19th Anniversary All-Star Issue" mentions Goulart on the cover, along with Larry Niven, Arthur C. Clarke, Robert Silverberg, Harlan Ellison, and the ever prolific Asimov. F&SF continues to showcase both well-known and up-and-coming authors. I have an issue from 2004 with stories by Joyce Carol Oates, Robert Sheckley and Paul Di Filippo (without F&SF I wouldn't have discovered what an inventive writer Di Filippo is). 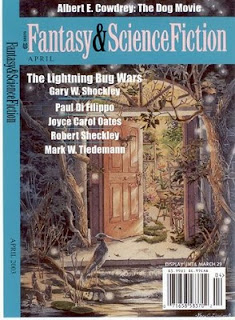 A couple of years ago, as an experiment, I wanted to explore how science fiction has been affected by the events of September 11th, 2001 and the World Trade Centerdestruction. I decided to focus on short stories I found in F&SF, picking some issues from the late 90's, and then some post-2001. Although the sci-fi and fantasy realms deal with the end of the world nearly every day, I could tell some authors were deeply influenced by the shocking events of 9/11/01. One story by Joyce Carol Oates, set in a post-apocalyptic world where everything is just running down echoed the way I felt for most of the rest of that year. Likewise Robert Reed's story "The Majesty of Angels" from September, 2002 tells the story of a massive catastrophe on Earth, and the angels have come as flight attendants on a surreal jumbo jet to guide the victims on their trip. And, although I'm unable to find the issue, I'm sure I read the short story that the movie "Knowing" is based on it the pages of F&SF (trust me, the story was better than the movie).

F&SF isn't all heavy material, however. The current issue has a good mix of stories: a fantasy tale of a woman who put her life into her painting, a tongue in cheek story of the "real" Martian chronicles, a twisted vision of a toy train set gone bad, an alternative WWII story where the Nazis planned to release zombies as their ultimate weapon, and more. As I read through the issue I got wrapped up in the stories, each one a little vacation from daily life. A vacation, maybe in a cabin, in the woods at the coast, reading by lantern light as the night rolls in.

This site has an index of all the past stories and authors, while this site has a nice archive of F&SF cover art. 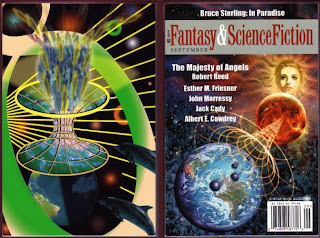 
We’ve got to be completely focused on defending this coast. The cost—the difference between keeping this oil out and having this oil in this wetlands, it literally could be life or death for many of these species...The day that we have all been fearing is upon us today," Bobby Jindal told reporters after a boat tour to the southernmost point of the Mississippi river estuary.


Here's a bit more from WikiPedia:
In 2006, Jindal sponsored the Deep Ocean Energy Resources Act (H.R. 4761), a bill to eliminate the moratorium on offshore oil and gas drilling over the U.S. outer continental shelf. A poll taken while the bill was being debated, showed that 73% of the U.S. public supported the measure. Jindal argues that 30-40% of oil reserves of the United States are near the Louisiana coast and increased drilling would reduce American dependence on foreign oil. This prompted the watchdog groups, Republicans for Environmental Protection as well as the nonpartisan League of Conservation Voters to rate him among the lowest in Congress in 2006

My opinion is that offshore drilling in depths greater than 500 feet should be banned world-wide. 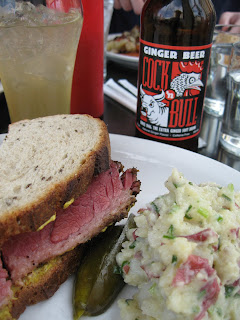 It was Take Your Child to Work Day, so I decided to show my son one of the best things about having a day job: going out for lunch. I'd heard from my friend Matt that Kenny & Zuke's Deli was outstanding but he didn't elaborate, so my interest was piqued. Browsing the website was only slightly less cryptic: I had agreed to meet Matt for lunch, but there were two locations, Kenny & Zuke's SandwichWorks in NW Portland, and Kenny & Zuke's Deli on SW 10th & Stark. A couple emails cleared up the confusion-- we were to meet at the Deli -- but I lingered over the "Food Pics" section of the website. I could tell from the photos that someone was really enthusiastic over bialys, pastries, meatloaf sandwiches, Reubens, clubs, dogs and pastrami, pastrami, pastrami.

Not to break the tension but yes, I ordered a pastrami sandwich.

I can count my memorable experiences with "New York Style" delis on one hand. In the 80's I used to hang out at Rose's deli on NW 23rd, stuffing myself on their oversize cinnamon rolls. After the old Rose's closed Kornblatt's, which lacks the charm but has excellent Reubens, filled the niche. My most authentic experience was at Carnegie Deli on 7th Ave in New York. I was sightseeing lower Manhattan and randomly chose the spot based on a photo of the chocolate cream pie. Aside from the pie, the most memorable part of the meal is that it's the first time I paid $8 for a sandwich (this was when McDonald's still had a 59 cent hamburger). It felt extravagant to be in NYC and pay so much for a sandwich.

What's memorable about Kenny & Zuke's is their goal to be a Jewish deli in the traditional way. Jewish delis spun off from the German delis, distinctively providing kosher and comfort food to the wave of Eastern European Jews who immigrated to New York in the late 19th century. More than just a restaurant the deli was a convenience store, a neighborhood grocer, a place to go for sandwich meats and kosher foods. By 1930 the typical Jewish deli had become what everyone knew as a New York style deli. 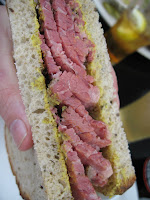 This is exactly what can be found at Kenny & Zuke's: They make their own pickles, bagels, bialys, rye bread, and more. And did I mention the pastrami? The menu described the Pastrami on Rye thusly: 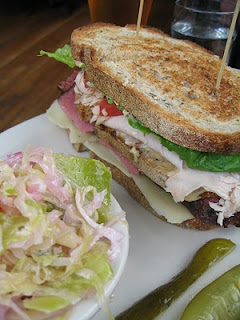 So, a few minutes after noon my son and I met Matt for lunch. As mentioned I got the pastrami sandwich while Matt ordered a Deli Club (pastrami, turkey & swiss on toast), and my young protege ordered breakfast for the second time that day. The pastrami was exactly as advertised. Thick & roughly hand-sliced, but so tender it falls apart in your mouth, and without a lot of fat. The rye has tasty caraway seeds, just as it should. Other than bread and meat it had mustard, a side of potato salad, and a snappy pickle. Matt's sandwich reminded me of the B. Kliban book "Never Eat Anything Bigger Than Your Head" (luckily he only consumed half of it, saving the rest for dinner). It also came with a pickle and a side of coleslaw that looked more like sauerkraut, but tasted somewhere in between.

The place has a surprising array of sodas and drinks. I ordered a Cock 'n Bull Ginger Beer because I couldn't pass up the chance to order aloud. Matt mentioned they also have the Mexican Coke, which is a different because it doesn't have any high fructose corn syrup -- just pure cane sugar. 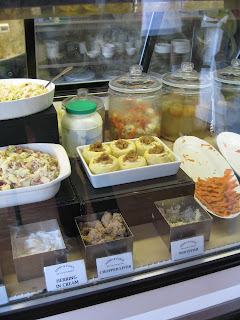 On the way out I stopped to drool over the lox and pickles at the deli counter. When I visit Kenny & Zuke's again (and I will) I think I'll drop in at breakfast time for a bialy, or maybe check out the Fried Chicken Wednesdays (with "smashed potatoes"). The sandwiches were good, but Kenny & Zuke's also offers meat platters and pastrami by the pound, so I'm tempted to just buy the fixin's and build the masterpiece myself.

I was surprised to learn that the Jewish Deli is a dying breed, but one man has taken it as his mission to revive the deli.  Writer David Sax published a book earlier this year called “Save the Deli: In Search of Perfect Pastrami, Crusty Rye and the Heart of Jewish Delicatessen.”  As mentioned in this article:


"In 1931 there were 2,000 delis in New York City, three-quarters of them kosher. Today, Sax says, his research turns up 25 Jewish delis in the city, two-thirds of which are kosher. A similar pattern has followed across North America, with city after city sounding the death knell for its last traditional deli. Sax guesses there are just a few hundred left worldwide, most of them in the United States."

Sitting, having lunch in downtown Portland at the corner window at Kenny & Zuke's, I can see the value of the deli. The dining room was busy but relaxed, the sun broke through the clouds. Next door is an old hotel that has been renovated to bring young travelers to stay in the heart of Portland. I felt a touch of nostalgia taking my son to lunch, thinking of lunches at diners with my dad or my grandfather.  It was a way to enjoy the old, slow style of food and company while bringing the vitality of local foods and business into the twenty-first century.