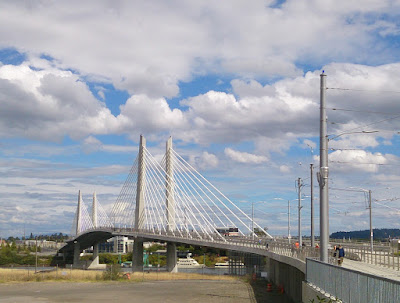 Tilikum Crossing opened last week (09/12/15). It was the first new bridge built across the Willamette in the Portland area since 1973, and also the only bridge in the U.S. which isn't for cars, but carries light rail trains, buses, streetcars, bicyclists and pedestrians.

Despite all the hoopla, I was surprised when I walked across it. The bridge name is Tilikum. Until I saw it spelled out, I had been thinking "Tillicum." I wondered why, and did it matter how it was spelled?

Tillicum is a Chinook jargon word that was used with various meaning for a century or more. Chinook Jargon was a trade language based on Chinook, the language spoken by the natives who inhabited what is now the Washington and Oregon coast. The language was used mainly in the 19th and early 20th centuries. 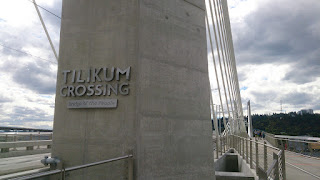 According to Oregon Geographic Names

by McArthur & McArthur, Tilikum in "early Chinook referred to people or tribe or even relatives. With the passage of time the word came to mean also friendly people or even a friend. It also means friendly or agreeable, as in the case of Tillicum Creek. The older Chinook jargon word for friend, applied to persons rather than things, is siks or six."

With some online research, I found a free edition of a Chinook Jargon dictionary. Here are the entries that have tilikum, tilicum, or tillicum.

This article here mentions that the words were probably spelled phonetically, along with simplifying everything. "Grammatical forms were reduced to their simplest expression, and variations in mood and tense conveyed only by adverbs or by the context."

Tony Johnson on this site has an interesting point about how Chinook jargon, what he calls Chinook Wawa, was different from the traditional Chinook language.

Interestingly, I found that English speakers may unknowingly use some Chinook jargon, for example muckamuck.  People may call a politician or a lodge leader a "high muckamuck."  In its proper Chinook form it's "hyas muckamuck" (pronounced "high-ass" -- ha!).  Sometimes it has degraded to "high mucketymuck."  Many English speakers recognize this to mean the big boss.  In Chinook it means a "big feed" or an "important banquet."

Also, the word and concept of potlatch has been integrated into US society.  In Chinook Jargon it means a ceremony among certain tribes involving food and exchange of gifts.  We sometimes use the term to refer to a potluck dinner, or sharing personal stuff with friends. There are more examples of popular Chinook jarogon here.

Tri-met states "Tilikum is a Chinook Jargon word meaning people, tribe, or family, and the name is intended to honor the Multnomah, Cascade, Clackamas, and other Chinookan peoples who lived in the area as long as 14,000 years ago."

But it is also a way to bridge between the ages and peoples.  The Chinook Nation still exists today. People in the area will use the bridge every day.  Hopefully, this bridge will be a reminder of the people who were here before us, and the legacy that we and the people around us leave for the future.

Haiku: A template for error messages

I see quite a few tongue in cheek references to Haiku versions of error messages. For example:


Program aborting:
Close all that you have worked on.
You ask far too much.

Many people know that Haiku require a certain meter for the phrases: 5 / 7 / 5. In English the meter is equated with syllables, but in Japanese it's called "on" which is more the beat of the languange. In English, Haiku also have other requirements: the use of a word that lets you know the season (kigo), a cutting word that divides the poem (kireji), and often specific references to nature.

Another basic template is the user story in agile development: As a (who?) I want to (what?) so that I can (why?). The (why?) is usually associated with a value statement.

So, why am I writing all this? I had an idea that we need a template for error messages. With all the interest in Haiku, it would seem that software developers might catch a clue in writing better error messages. Just

What's wrong
Why it's wrong
what to do about it
No comments:
Email ThisBlogThis!Share to TwitterShare to FacebookShare to Pinterest
Newer Posts Older Posts Home
Subscribe to: Posts (Atom)