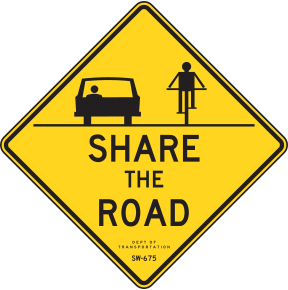 Today on my bike ride to work I saw something that made me think about how bikes and cars interact on the road.

It was a nice spring day, the kind that brings out both hard core bike fans and newbies. I was coasting down a mildly sloped hill on a street designated as a bike route. I was probably going about 15 or 20 mph.

Nearly two blocks ahead of me I saw a cyclist in the middle of the lane, going a little slower, and he seemed to wobble a bit in the lane.  Although he was a ways ahead, I slightly adjusted my speed and got ready to pass him.

Then, a new, black Mustang pulled out of an intersection in front of me and cruised down the street.  I had seen the car before, usually rumbling with loud music. If you are the kind of person who likes late-model factory-optioned muscle cars, you’d be proud to drive it.
The ‘Stang was probably half a block away, but the engine was loud enough to be annoying. It revved up to about 20 mph, maybe more, and passed the cyclist with only a narrow berth. I noticed the incident for two reasons: the car was loud and fast, and it passed the cyclist quickly although he was riding in the center of the lane. The car drove on past, the guy on the bike seemed ok, and I figured “no harm, no foul.”

At the next stop sign, because of cross traffic, we all three pulled up together.  I broke to the right, because I was turning, but the other biker crossed to the Mustang’s driver-side and rapped on the window with his fist.

"You drive too fast! You dangerous!" he shouted.

Now, It's easy to be righteous when you're riding a bike.  It’s easy to think, “I'm going places, and I'm doing it under my own power, dammit! I'm saving the world one pedal at a time.” That may be true, but being righteous doesn't make you right.

On the other hand, this was probably more a case of adrenaline than righteousness.  If you're not used to it, a close shave with a bumper can be frightening. After the tight pass, the guy was obviously more shaken than I would have expected.  He want to let the driver know what a fright he’d put into the cyclist.

Part of what makes this encounter difficult is that it happened on a street that is not only a designated bike route, but an "urban greenway." It’s a street meant to promote walking and cycling.  On most streets cyclists are third class citizens while cars get the priority, but it seems like cyclists should be royalty on bike routes.  On the other hand, it’s not illegal for cars to drive on the street, and the guy with the Mustang probably lives in the neighborhood.

The cyclist, despite his fear, could have approached the car differently. Maybe an open hand rather than a fist.  I don't know if the driver would have rolled down his window -- there's nothing more threatening to a driver than a personal confrontation.  Driving a car is like wearing a suit of armor, while bikes suffer from total exposure.

My opinion is that the driver needed some empathy and awareness.  The cyclist was probably trying to achieve that, but a fist on the window doesn’t work. Instead, the driver should probably spend some time in the cyclist’s shoes.  For example, a long time ago I broke both arms.  It wasn’t until they were both in a sling that I realized how difficult some things can be without arms (like opening a door, or tying my shoes. Let’s keep it clean here, huh?)  In the same way, if  everyone who drove could take a day to walk or ride the route, it might make traffic a little bit nicer for everyone.  Don't simply share the road -- share the ride.

It's hard for many people to to ride to work. Bad weather, dangerous traffic, potholes and dark streets can all be detriments to a happy cyclist.  It's even harder if they feel endangered.

I'm not going to tell you how the encounter ended. Instead, I'll ask, what would you do? How would you end it?