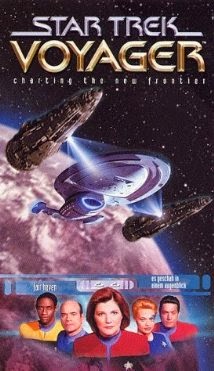 I was going through some old files on my computer and found a plot synopsis I'd written a long time ago. Three things tell you how long ago: it's a local file, not in the cloud; I'm talking about a computer, not a laptop, tablet or phone; and it's about Star Trek Voyager.  I'd nearly forgotten about that show, but when it was broadcast on TV I watched every week.

I think I'd written the synopsis because I was bemoaning with friends the lack of real science fiction plots in the show.  Voyager was often a soap opera in space.  So, determined to "show them," I came up with some script ideas.  Here's one:

Summary: While replenishing their Trilithium supply, Paris and a red-shirt get infected with a fungus.  The problem with eradicating it from their bodies is that it appears to be a sentient civilization.

Synopsis: Planetside.  Paris and Lee have just finished prospecting for Trilithium deposits on the planet’s surface.  The planet is wrapped in deep clouds, with an extremely moist surface, unusual for Class M planets.  The surface is soft and easy to mine. (Do they have to use the transporter for the Trilithium? Or the shuttle?)
Paris & Lee use the transporter to return to Voyager.  When they return, the transporter shows some odd readings. Janeway orders the transporter team to perform a complete maintenance check on it, and sends the two crew members to sick bay for a physical.
On the way to sick bay Paris stops just briefly to pick up --- something --- in the health club.  At that point he claps somebody in the steam room on the back, and they get infected.


What struck me most is how much I have forgotten those characters. I barely remember what Paris looked like, let alone his personality. And when I read "Lee" I'm thinking Lee Adama from Battlestar Galactica.

So, yes, the plots could have been better. But in retrospect, the characters seem to fade away as well.

I've been riding to work off and on for at least two decades. I'm lucky to live in Portland, which is a bike-friendly town (it hasn't always been that way). I used to try to avoid anything that made me look too much like a bike geek. Over time, however, I've discovered that some things work well (no matter what they look like).

Here are 31 tips for using your bike to commute to work.

My old ride to work was along the Springwater Corridor.
No comments:
Email ThisBlogThis!Share to TwitterShare to FacebookShare to Pinterest
Newer Posts Older Posts Home
Subscribe to: Posts (Atom)