"Brie on baguette, s'il vous plait"
At the beginning of Victor Hugo's Les Misérables the lead character Jean Valjean has just been released from prison after nineteen years in jail for stealing a loaf of bread.  During the course of the novel Valjean, who attempts to escape his past and rise above his peasant status is pursued by Inspector Javert.  Javert has ten times the intensity of Tommy Lee Jones chasing the fugitive Harrison Ford, and although Hugo expertly weaves the novel, stepping back I sometimes wonder whether a loaf of bread can really spur such a story.

Until I read the daily headlines.

For example, if you google "subway restaurant robbery" you'll find that sandwich-related crimes happen so often they've become almost mundane.  I'm sure the robbery victims, however, found it extremely traumatic, and pulling that single narrative thread is what makes Victor Hugo's masterpiece so compelling.

What, for example, was this thief thinking when he robbed a sandwich shop using a Gatorade bottle full of gasoline?  He later locked himself in his hotel room and set it on fire.  When they arrested him he was booked with arson, as well as an outstanding warrant for Fraud.  The whole story seems confusing: he also had a gun, so why did he use the gasoline?  Does the Fraud case play into this -- did he really want to commit suicide in a "blaze" of glory? Why a sandwich shop?

Other times, when life gives you cold cuts, you make sandwiches. In this case the robber broke in, couldn't find the case, so he grabbed the sandwich makings, as well as the cookies. I hope he gives them to someone who will appreciate stolen treats.

Sometimes sandwiches are used to dish out justice.  There's the case of the ongoing food fights at an Atlantic City high school.  After several food fights the cafeteria workers decided to punish the entire lunch crowd by serving only bread and cheese.


"Superintendent Fredrick Nickles confirmed that one lunch period was subjected to the simple serving, consisting of two slices of bread and a slab of cheese, after five students were suspended for starting a food fight. He again insisted that the meal meets the state requirements and is served to send a message to the rest of the student body."

This punishment sounds eerily like the old "bread and water" of prisoners, and I can see how an "us vs them" mentality might have been formed.  I see a movie script brewing: a rag-tag group of lunch ladies confront and mentor tough inner-city  students, ultimately bringing victory to their school on the reality show "Cafeteria Chef."  Tag line: "Don't mess with the lunch ladies."

Which brings me to the Blago Sandwich.  Sometimes there's justice, and sometimes there's injustice, and sometimes there's Rod Blagojevich.  The former Governor of Illinois, who was arrested for trying to sell his state's Senate seat, is in the news for a sandwich named in his honor: "The Innocent aka Blago."  Made with turkey, Swiss cheese, pesto, mayo, avocado and spinach, I notice it has four ingredients which are essentially fats, so it could also be called the "Big Fat Turkey" sandwich.  Blagojevich called it "an accurate and truthful" sandwich.

Which gave me the idea that maybe we should name more sandwiches after public figures. For example "The Tom Cruise" could be Swiss, Cheddar and Provolone with sprouts, Chantrelle mushrooms, toasted on white bread.  Pretty cheesy, a little healthy, a hint of crazy, and the occasional flops. 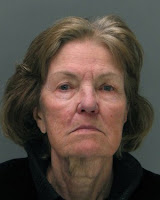 Speaking of crazy, that leads me to the oddest of sandwich-related crimes.  A woman 74-year-old Boise woman was arrested after pouring mayonnaise in the Ada County library's book drop box.  They say she's a "person of interest in at least 10 other condiment-related crimes."  The article says "library employees have reported finding books in the drop box covered in corn syrup and ketchup,"  but I wondered how she chose her condiments? Did she plan on pouring chutney into the Red Box if the movie was a turkey?  Tossing bags of aoli at used car dealerships to protest smarmy salesmen?  What book had she read that prompted her to use mayo on the library drop box? I'll bet it wasn't Les Miserables, but it would be an interesting story that describes her motivation.

I love the weird things "the internet" suggests to me. Two examples are the Captcha validation phrases and Google Typeahead. 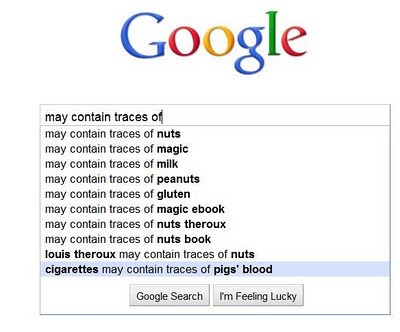 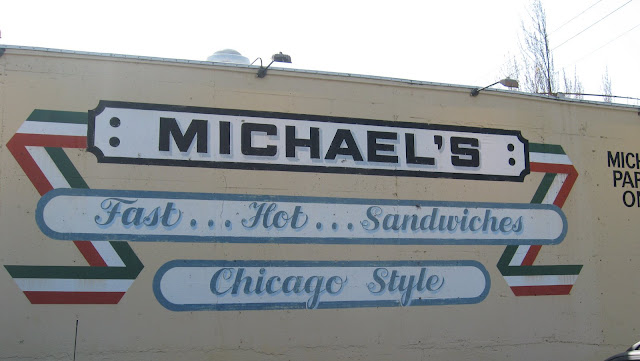 There are some things you can't get everywhere. Take for example: pizza.

I know "pizza" is available everywhere, hawked on corners, sold at food courts, carts and middle school dances. For the most part the melted cheese, crust and grease run together like so much melted cheese, but a few distinctive specimens, such as Bell's Pizza in East Lansing, Michigan and Woodstock's Pizza in Corvallis, Oregon,  hold special places in my heart.

When I was growing up in Michigan my family raved over Bell's Pizza. It's a Greek style pizza with a bready, slightly fluffy crust and a mix of white and orange cheeses. Aside from the cheese, the defining characteristic was a fruity olive oil which permeated the the pie. In my memory Bell's Pizza fluctuates between pizza and an open-faced toasted cheese sandwich brushed with olive oil.

When I returned to my hometown for my 20th high school reunion I had to visit Bell's to see if it was still the same, and I was devastated to find the restaurant and the entire city block in the midst of demolition for urban renewal. Luckily I discovered they'd moved to a new location a mile East on Grand River Avenue, and I quickly ordered a medium pie, half cheese, half pepperoni. Twenty years later, a mile apart, Bell's Pizza was still the same.

During my college years at Oregon State University, Woodstock's Pizza was known for the crust. Specifically: as a poor college student I often felt cheated by Woodstock's pizza because of the crust.  Part of the pizza signature was to roll the outer crust back onto the pizza, forming a crusty tube of sauce, but also reducing the surface area that could be devoted to toppings. I resented the lack of topping space, and would usually order a single topping with extra sauce ("free!") to make up for the deficiency.  In retrospect, however, the sauce was far better than Dominos, my only other pizza option, and the sauce-filled rolled crust made a tasty appetizer.

Once or twice a year I pass through Corvallis and have stopped at Woodstock's for lunch. I wonder at the odd reflections in life because just like Bell's, the building that housed Woodstock's has been razed, only this time the replacement building is less than 50 feet from the original. Also, although decades have passed since I first tasted Woodstock's, the pizza is essentially the same in crust, sauce and spirit. 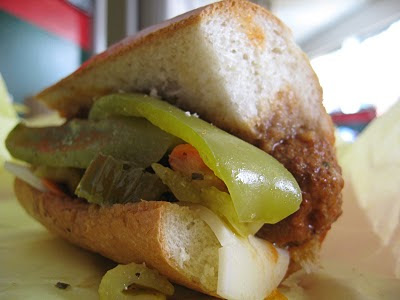 I don't throw these places into the spotlight because they're outstanding, but because they are distinctive. They're both locally owned and operated, and the food is only available if you're in the neighborhood at the right time. In the Internet era, when entertainment is "on demand" and franchises dot the country like pimples on a burger-flipping teen, there's something comforting about meals you can't get just anywhere. It's almost like going home again, finding the special lunch mom made just for you. And, although I can't return to the actual restaurants, it's not the location I'm missing but some bit of nostalgia. Eating the food approximates a certain place and time found only in my mind.

In Portland there are some sandwich places that try to evoke a similar sense of place. Philadelphia's is a cheese steak restaurant said to serve to serve food just like the famous sandwiches from Philly. I've never had the originals, but I've tried Philadelphia's several times without discovering what people like about them.  This reinforces my belief that it's not always the food, but the people and surroundings that make it a memorable meal.

My knowledge of Chicago food isn't deep. I know they have deep-dish pizza, hot dogs, and a little Italy.  So, to get some more detail I asked my cousin and her husband, who live there, what they consider "Chicago style" food.  The answer included  "pierogies...Chicago-style hot dog (onions, relish, pickle, sliced tomato, whole peppers, and celery salt), [and] Italian beef sandwiches." Which confirmed that Italian beef sandwiches are indeed part of the Chicago food profile.  I cross referenced this with some other recent immigrants to Portland from Chicago and they said that Michael's was "pretty close" to what one would find in the Windy City.

I'm not surprised that I've lived in Portland for nearly twenty years and have never visited Michael's. The location on SE Sandy is completely evident, but parking is not. I left my car a block away and approached on foot only to realize there's a parking lot immediately behind the restaurant, but you have to approach it from Burnside, around the corner from Hippo Hardware. Inside the location was homey, filled with regulars who knew the each other by name. One geezer asked for Michael, but the cashier said he was out "enjoying the sunshine." They have a pretty efficient system for ordering, making it fast service without being fast food. To maintain the order among the customers they have a quirky counter decoration of bloody knives and cleavers, warning customers not to grab for the mustard or ketchup -- or else! Despite this tongue-in-cheek threat the place has a menu that's friendly to kids, and also promises a few vegetarian options.

I wanted to try a couple examples of their sandwiches, so I got both the meatball and a Chicago-style Italian beef sandwich. I asked for the meatball "pizza style," which meant adding tomato sauce and provolone to it, which was pretty tasty but I had a problem with the structure. Instead of layering the peppers and condiments into the sandwich, the meatballs were nestled deep into the bread, while the veggies sat on top. First the veggies kept escaping over the top, then the sauce weakened the bread and the meatballs got out the other side. 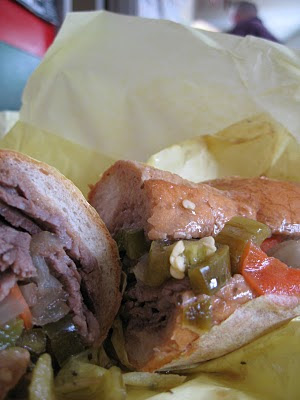 I was surprised by the namesake sandwich, which was described as "top round, sliced thin & marinated in its own gravy." I pictured the thick kind of gravy that goes over mashed potatoes, but discovered it really meant a meat sauce, slightly thicker than au jus. The sliced beef was OK, mild but with a distinctive flavor that must be what nostalgia tastes like to some West Coast Chicagoans. I liked the hot peppers, which weren't very hot, and I was pleasantly surprised by the pickled celery. If anything draws you to this place, ask for extra pickled celery.  It seems to me that the celery and the gravy are like Bell's Pizza's olive oil, Woodstock's rolled crust, the signature of the sandwich.

Overall I was impressed by the sandwiches, but not enamored.  Maybe someday I'll visit Chicago, or maybe Philadelphia and have a sandwich, and then return to Portland.  Years from now they might widen SE Sandy, and have to demolish the keystone building holding Michael's.  Perhaps it will be a sunny day, and I'll walk down the street to Michael's II a couple blocks away and I'll order a Chicago style Italian beef sandwich, or maybe a Polish sausage with celery.   But for now, I have to admit my own personal quest doesn't head toward Chicago, but for East Lansing, or Corvallis.  Give Michael's a try, but it's probably more apt for someone who is looking for a certain nostalgic taste.