In “Martian Time-Slip” the year is 1994, and humans have been colonizing Mars since the late 1970's. The UN will pay for emigration to Mars, but returning to Earth is a much more difficult proposal, so once they arrive most colonists are stuck on Mars.

Joe Bohlen lives with his wife Silvia and son David near the George Washington canal system, across the way from Norbert and Erna Steiner, their three daughters and their severely autistic son Manfred. Bohlen works as a repairman for the Yee Company, which is a pretty useful job on Mars where new goods from Earth are hard to acquire. Norbert Steiner, on the other hand, smuggles luxury items from Earth and sells them on the black market. Steiner suffering from depression, commits suicide, setting off a chain of events. 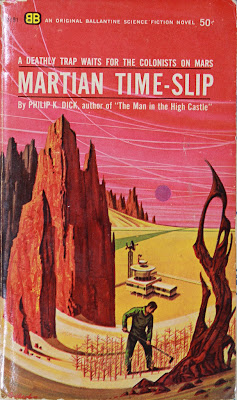 During an emergency call to help some indigenous Martians, called Bleekman, in the desert, Bohlen meets Arnie Kott, president of the plumbing union which controls much of the water on Mars. Arnie has heard rumors of the UN developments, and wanting to protect his mineral rights he wants to find out the specific location before the Earth investors arrive. He's also worried about his standing on Mars. If bigger fish arrive from Earth he might get lost in the shuffle of power.

Kott accidentally encounters Manfred, and recognizes that the boy may be some sort of temporal anomaly. At one point Arnie asks “could the schizophrenic be running so fast, compared to us, in time, that he’s actually in what to us is the future? Would that account for his precognition?” So he hires Bohlen to build a machine that would let them communicate with Manfred in real time, the goal being to foresee which parcels of land to buy before the UN and Earth investors arrive.

But, something goes wrong, and the story comes unstuck in time, returning to an event at Arnie Kott’s apartment with Bohlen, Kott’s girlfriend Doreen Anderton, Manfred, and Kott’s Bleekman servant Heliogabalus. In the story it’s not clear, but we are either seeing this event as it replays in Manfred’s mind in far future, or Manfred is actually altering time itself to replay the event. During one instance of this scene Manfred communicates with the Bleekman in a normalized time-space, which perhaps is the reason that Manfred is anchored to this time.

Eventually Kott learns that Bohlen’s own father, who has just arrived on Mars, is one of the Earth investors, and this spurs him to give up building the machine and take another course of action. Helio tells them that the Bleekmen's sacred rock, "Dirty Knobby", can be used to manipulate time, and Kott takes Bohlen and Manfred in a ‘copter out to the rock give it a try. Unfortunately, Kott ends up looped back to the beginning of the novel, when he first meets Bohlen, and ends up getting shot with a poisoned arrow, ending the trance and returning him to his current time. After that it’s all downhill for Arnie.

Similar to the “Clans of the Alphane Moon,” Dick’s psychology was interesting to me when I was in high school, but large parts of it seem clumsy, and almost offensive now. Psychiatrists had only begun to study autism in the 40’s, two decades before “Martian Time-Slip” was written, and autism and schizophrenia had been linked in many researchers’ minds until the 1960s, when psychiatrists began to have a separate understanding of autism in children. In the novel Dick often links the two together, even linking schizophrenic Joe Bohlen with autistic Manfred Steiner in the events of the book. At one point Jack muses that autism is just a childhood version of schizophrenia.

In a way, though, this book seems to be Dick’s therapy for his own schizophrenia, trying to understand what causes it. Bohlen suffers a psychotic break at his son’s school when he’s called to repair the Kindly Dad android teacher. Fixing the tapes in the teacher reminds him of earlier episodes on Earth where he imagined everyone else to be robots, and that was one of his reasons for moving to Mars. Reading through Dick’s books, I wonder if the author isn’t describing his own thoughts at some point in time.

Dick also has a recurring theme in his novels of the oppressive building. In “Ubik”, for example, one of the characters has to continually pay the building for any convenience found in his apartment -- a couple bucks for filters and coffee beans to make coffee, or even fifty cents to open the door. In “The Man Who Japed” the oppression takes shape in the form of Mrs. Birmingham and the building committee passing judgement on anyone in the building who has any moral lapses. The building in “A Maze of Death” is an eerie hulk that literally stalks the characters through an alien jungle, menacing and full of dread. In “Martian Time-Slip” the AM-WEB building, which is the name of the proposed UN developments, lurks in Manfred’s future self as a tomb, a repository for the aged and decrepit colonists left on Mars as it slowly decays.

In many of Dick’s books the characters experience shared hallucinations, but most of the time these are spurred by drugs. In “Time-slip” the hallucination seems to be emanating from Manfred. The way the hallucinations are written, they are usually out of phase with time, so it could be that Manfred is manipulating time, or it could be that seeing the story from point of view of the far-future Manfred. In both cases, this would also help to explain Manfred’s precognition, although it wouldn’t account for the static points in time coming from the Bleekman.

This novel is Dick’s attempt to meld science fiction with more literary themes and characters, and to use innovative ways to tell the story. He’s quoted as saying


"With HIGH CASTLE and MARTIAN TIME SLIP, I thought I had bridged the gap between the experimental mainstream novel and science fiction. Suddenly I'd found a way to do everything I wanted to do as a writer. I had in mind a whole series of books, a vision of a new kind of science fiction progressing from those two novels. Then TIME SLIP was rejected by Putnam, and every other hardcover publisher we sent it to."

"My vision collapsed. I was crushed. I had made a mis-calculation somewhere, and I didn't know where. The evaluation I had made of myself, of the marketplace, went poof! I reverted to a more primitive concept of my writing. The books that might have followed TIME SLIP were gone."

Despite the uplifting ending, most of this book is tinged with despair, and that could reflect Dick’s self-analysis. From time to time we see the world from Manfred’s point of view, and it’s filled with gubble-gubble - the world of entropy and decay. Dick has a similar term for this in “Do Androids Dream of Electric Sheep”, and that’s kipple, the garbage that fills in the empty spaces in our lives. You can tell from interviews that Dick was often too hard on himself. The mental problems which he suffered from may be this gubble-gubble, gnawing at the edges of his life, but in “Martian Time-Slip” he came very close to creating the novel he was was searching for.

From the back flap:


Meet Goodmember Arnie Kott (member in good standing, that is) of the powerful plumbing union -- which has a stranglehold on Mars.
Or Joe Bohlen, a slightly schizoid technician whose time sense has a way of slipping around on him.
And the boy Manfred, who almost never gets to live in the present -- except when he is with the odd native Bleekmen of Mars.
From these, and many others, Philip Dick weaves a tapestry shot throught with color, excitement, conflict and humor -- at once realistic, strange and totally convincing.