Philip K Dick’s novel “The Simulacra” is set in 2041, fifty years after West Germany joined the US as the fifty-first state of the Union. Society is controlled by the Geheimnis, called Ges, the infocratic elite who know the secret: the current president of the USEA is a robot known as Der Alte, just as previous presidents have also been simulacrum for nearly the past half-century. The true leadership lies with the pretty first lady, Nicole Thibodeaux, who not only directs policy, but also holds “American Idol”-like TV broadcasts to promote new cultural ideas and shape the morals of the country.

The instigating event for “The Simulacra” is the McPhearson act, which outlaws psychoanalysis in favor of chemical treatment. One psychiatrist, however, Dr. Egon Superb is allowed to continue practicing. He’s told by a representative from the government that they have used their time-travel machines to discover that he will fail to treat a patient, and that will have a significant effect on the path of history.

The novel follows the threads of some of the people who eventually end up seeing Dr. Superb. Vince Strikerock is a Ge who works at Karp und Sohnen, while his brother Chic is a salesman for Frauenzimmer Associates, a competing company that builds simulacra as companions for moon colonists. Ian Duncan lives in the same building as the Strikerock’s, and his goal is to reunite with his partner Al Miller so their classical jug band can perform at Nicole’s White House concerts. Al Miller, however, works Loony Luke, who owns the Jalopy Jungle lots - an enterprise slightly outside of the law that provides cheap rockets to people who want to escape the heavy-handed Earth government. Meanwhile, Nat Flieger has made a pilgrimage to the home of Richard Kongrosian, the telekinetic pianist, in hopes of recording some new must for his record company. 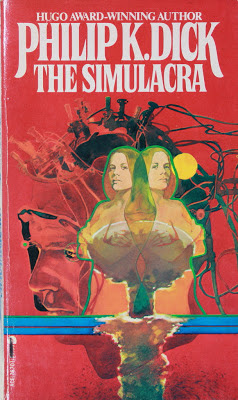 As if this isn’t enough plot, Dick decides to pack more element into the mix: Nicole’s government has an ornate plan to use their time-travel device bring Herman Goering from the past to use against the Sons of Job. The side effect, they hope, will be a collapse of Hitler's third reich, saving thousands of Jews. Meanwhile, the shadowy leader of the Sons of Job, Bertold Goltz, has somehow appropriated some time-travel machinery and is using it to stay one step ahead of Nicole and her government.

Like “The Man in the High Castle” and “Martian Time-Slip,” “The Simulacra” is an excellent example of Dick’s early 60’s work where he was trying to write a novel that also happened to be science fiction. Of the three, “High Castle” is the best example, while “Time-Slip” tended to be more experimental, and suffered from that. “The Simulacra” works, but Dick packed it so full of ideas that instead of the story unfolding, it tends to snap and pop open, making it feel less natural than “High Castle.”

In “Vulcan’s Hammer” and “The World Jones Made” the stories involved cults based on charismatic leaders, but “The Simulacra” is the first time he directly uses Adolf Hitler and the Nazi Party in the story. Of course, being science fiction, Dick can make up something like the Von Lessinger time-travel equipment, and then bring Goering directly into the story. Also, considering the amount of research that must have gone into “High Castle,” it’s not surprising that Dick would want to reuse the Nazis, perhaps bringing them into the future, which is exactly what he’s done by creating Der Alte, the artificial leader of the USEA.

The papoola bothers me. First, everyone in the story knows that the actual papoolas are extinct, yet they still like this artificial one. Second, everyone knows that they are being persuaded artificially by the papoola, yet they still go with it. Is the papoola like advertising? I’d have to say: No. In fact, for Dick it seems like advertising is more insidious, more like the Theodorous Nitz commercial that infiltrates the car. A bug that gets to you, no matter where you are, and then delivers its message in a vile way. PDK has many examples of this sort of infiltration: the public shamer in “The Unteleported Man,” or the juveniles - mechanical insect spies - who expose Allen Purcell’s acts in “The Man Who Japed,” or even the flying spy extensions of “Vulcan’s Hammer.” But the papoola isn’t invasive or evil, it seems to be liked by everyone. What inspired Dick to create the papoola? In an interview Dick says that he thinks the papoola’s ultimate scene is “funny matter, because it's a comic tragedy and a tragic comedy. That they have pinned all their hopes on this moment and then this little animal which normally is completely benign, suddenly takes it into its head to bite the first lady.” So, perhaps the papoola is humor, that thing which everyone likes, but it can be used subversively, and it can bite you when you least expect it. PKD has a fair amount of humor in his books, but it’s often so tongue-in-cheek that some people may miss the punchlines. 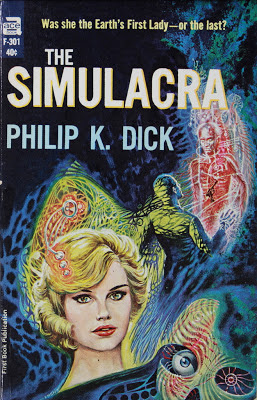 Let’s take a moment to talk about the title: “The Simulacra,” which is the plural form of the latin word “simulacrum.” According to Wikipedia it means “likeness” or “similarity", and “was first recorded in the English language in the late 16th century, used to describe a representation, such as a statue or a painting, especially of a god. By the late 19th century, it had gathered a secondary association of inferiority: an image without the substance or qualities of the original.” Dick spends a lot of time in his books working with ersatz environments and people. In his (undelivered) essay “How to Build a Universe That Doesn't Fall Apart Two Days Later,” he says

“what I consider important. I can't claim to be an authority on anything, but I can honestly say that certain matters absolutely fascinate me, and that I write about them all the time. The two basic topics which fascinate me are "What is reality?" and "What constitutes the authentic human being?" Over the twenty-seven years in which I have published novels and stories I have investigated these two interrelated topics over and over again. I consider them important topics. What are we? What is it which surrounds us, that we call the not-me, or the empirical or phenomenal world?”


But what I find especially interesting is a comment he makes later in the essay:

“In my writing I got so interested in fakes that I finally came up with the concept of fake fakes. For example, in Disneyland there are fake birds worked by electric motors which emit caws and shrieks as you pass by them. Suppose some night all of us sneaked into the park with real birds and substituted them for the artificial ones. Imagine the horror the Disneyland officials would feel when they discovered the cruel hoax. Real birds! And perhaps someday even real hippos and lions. Consternation. The park being cunningly transmuted from the unreal to the real, by sinister forces. For instance, suppose the Matterhorn turned into a genuine snow-covered mountain? What if the entire place, by a miracle of God's power and wisdom, was changed, in a moment, in the blink of an eye, into something incorruptible? They would have to close down.”


In “The Simulacra” the Ges know that Der Alte is an ersatz leader, an android. But the true secret of leadership is that Nicole is also a false leader, placed there as a figurehead. Even so, she has power on a daily basis, and when the government is threatened she takes the initiative to act as a leader. The fake leader becomes an actual leader.

I haven’t read much Baudrillard, the famous postmodern philosopher who wrote “Simulacra and Simulation” and many other books, but in my cursory research, although Baudrillard doesn’t mention Dick, he is following the same idea: that a simulacrum is not a copy of the real, but becomes truth in its own right -- the hyperreal.

Because “The Simulacra” is so packed with ideas, and also because of the way Dick seems to take the oblique path to humor, it’s worth reading the novel more than once. At first you will see the simulation, an imitation of a novel, cached in science fiction. But subsequently, you will find a story of humans, working toward their ambitions despite the science fiction world.

This is a novel of some very extraordinary people in the very extraordinary world of the 21st Century.
They include a striking beauty who had ruled the White House for nearly a century, a pianist who played without touching the keyboard, the world’s last practicing psychiatrist, a rabble-rousing time traveler, and a host of other men, women, simulacra, “chuppers,” and conniving things, all meshed together in an intricately plotted novel of idea and counter-idea, action and reaction.
It’s a Philip K Dick story of the future, a steady pyrotechnic display such as has made its author a top-rate Hugo Winner.