Registration for the 2016 conference in Seattle is about to open, which made me realize I had not yet posted my sketchnotes from 2015.  Click on an image to see the larger version. 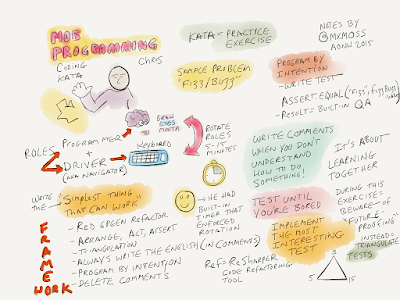 Mob Programming - The Coding Kata - hosted by Chris (?). During this talk we practiced mob programming, which is where one person runs the keyboard, and a separate person (or even the whole team) directs writing the code.  The practice is meant to exercise both the muscle-memory of writing code (keyboard) and the analytical skills required to explain the code to someone else (the director).  Using unit tests, iterative enhancements, and good coding hygiene, both the director and the keyboarder share their skills and knowledge. Then they swap places.  Reference: mobprogramming.org. 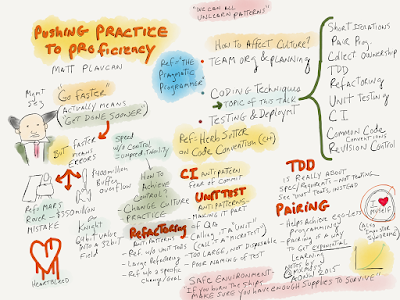 Pushing Practice to Proficiency was organized by Matt Plavcan from Intel. Similar to mob programming, his talk was organized around inoculating the team with the culture of lean engineering, and then using this to infect surrounding teams. The end result is a more proficient company. 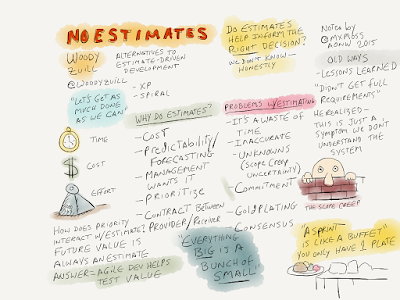 No Estimates, led by Woody Zuill, discussed better ways of delivering the desired functionality within a given time. 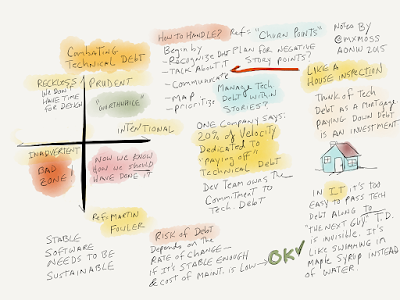 A group of people discussed Combating Technical Debt: What's acceptable, how to manage it, how to mitigate it.  The phrase Technical Debt was first coined by Martin Fowler. 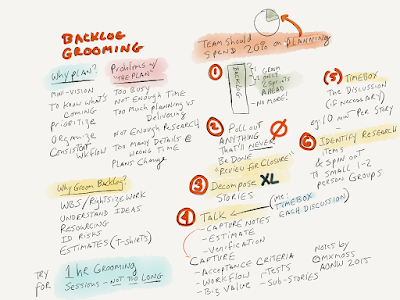 During the Backlog Grooming session people shared their tips for effectively and efficiently managing the project backlog.  This is something I definitely need to revisit from time-to-time. 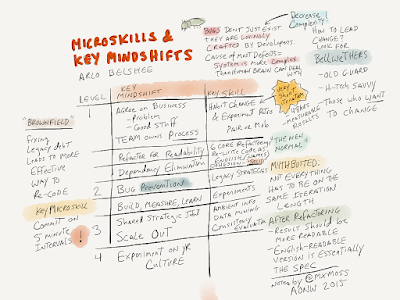 Arlo Belshee lead at least two sessions.  The first session, Microskills & Key Mindshifts, listed his top mental models for taking coding and project outcomes to the next level -- and then he listed the levels.  Some key points included refactoring, metrics, agile experiments, and cultivation of corporate culture. 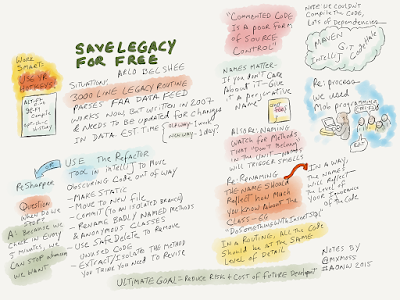 Arlo also presented his thoughts on refactoring legacy code.  Much of what he began to describe at AONW has be elaborated in his blog posts "Naming is a process, not a single step."  He also included mob programming in his demonstration of refactoring. 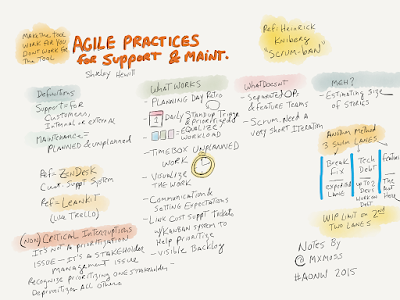 Agile Practices for Support and Maintenance organized by Shirley Hewitt raised some good ideas for managing maintenance development.  I liked the idea of creating swim lanes to provide visibility on technical debt maintenance or items that are broken in production.